I don’t know why I never published this…it’s pretty old.

We’ve really been making an effort to try out places that have been on our ‘to try’ list for way too long.  A little hit or miss, but with wise ordering, I think you’ll be pretty happy with a visit to Tesoros Cafe on upper Union St. in Schenectady.

Their inside space is nice enough with some of the tables tucked into nooks or near windows.

You may be watched… 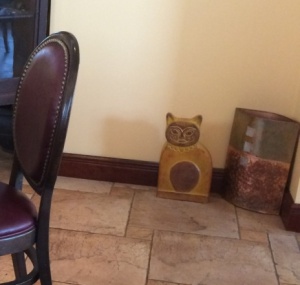 We finally hit up the Cafe when we tried to go to Union Cafe for lunch but it was packed.  Tesoros was also busy, but we came in on the tail end of the lunch rush on a beautiful day.  They were clearly overwhelmed for some reason, even though when we were there it wasn’t full anymore.  Missing silverware, slow service, etc.  It was OK, we weren’t in a hurry.  It sounded like a nearby table had to take their food to go or something, though, it took so long to get it.  One visit on a clearly busy day is certainly not enough for us to make any judgements on typical levels of service, though.

One thing that wasn’t suffering, as nearly as we could tell, was the kitchen.  Busy or not, the food was prepared correctly and beautifully.  However, this is where wise ordering comes into play at Tesoros. 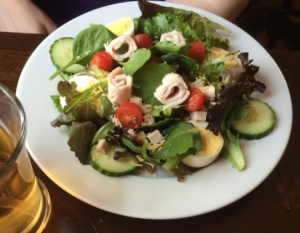 This is the salad my wife ordered.  Pretty packed with turkey, isn’t it?  Not much of a meal, let’s be honest.  Bear in mind, most entrees are in the 10-15 dollar range.  She was hungry not much later.

However…look at what I got: 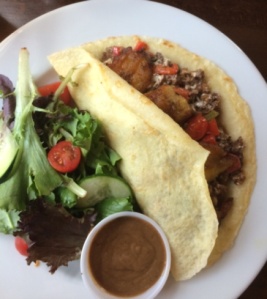 That’s a crepe with plantains, etc.  I’m afraid I’ve sat on this trip so long I honestly don’t remember what else was in there.  Chicken?  Pork?  It was really, really good.  The tender plantains worked really well with the rest of the ingredients, adding a touch of sweetness.  And look at my side salad that came with it.  Apart from a couple shreds of turkey, it’s basically the same salad my wife paid full price for as an entree.  Hmm.

The second time we went it was lunchtime and pretty full.  Service was notably better.  Our tea and hot chocolate were blazing hot.  Minor point, but the tables aren’t that large and the hot drinks are served on like a salad plate, instead of just a saucer, and they take up too much room.  Again, minor.

No photos, but we both got tasty crepes.  The crepes themselves are well cooked and sturdy, but still thin.  I had a ham and cheese crepe, packed with slices of quality salty ham (think thick-sliced deli in terms of thickness) and a pool of cheddar.  Add to that chunks of canned pineapple and a drizzle across it all of sweet caramel.  I wasn’t sure about the caramel, but there was just a touch and it did, with the pineapple, cut the savory with some sweet that really did work.  Bear in mind that I do like Hawaiian pizza. 🙂

My wife had the Banana and Peanut Butter crepe, which also had a heavy drizzle of chocolate and a thick padding of whipped cream.  Too much actually, almost half of it got scraped off and left behind.

One thought on “Order wisely at Tesoros Cafe for big rewards”

Maybe find what you seek?

What are you looking for?