I made a quick, unplanned impulse trip through a ‘foreign’ (more upstate) Walmart the other day.  One of the two things I bought is this box of Orchards Skittles.

It was in a big ‘movie theater box’ bin of candy for 98 cents and I figured it was an old summer flavor being clearanced out.  But no.  It turns out it’s a brand new flavor mix just being released right now.  I thought the flavor mix looked interesting, especially since it contains the lime (vs. the new green apple green – boooo!!!!  Boo, green apple, boo!  Very boo!  We want lime!  We want lime!), but then to find out it’s new, well, food blogger happy dance.  Look at these flavors.

typical back of the box stuff

I actually hadn’t planned to pop this open for a while, but since it’s all new and stuff I decided to get a review up here 🙂

What you see vs. What you get

The orange is wonderful.  I’m a LONG time orange-flavored candy lover and these didn’t let me down.  There’s really no tartness to it, just juicy orange.  Best yet, it has a bit of natural tasting orange flavor (especially on the back end), not a ‘candy orange’ harsh artificial tasting orange.  I really liked this one.

I also liked the peach.  It’s a light tasting peach, doesn’t hit you over the head at all.  Again, lightly juicy and fruity, easy to recognize that it’s supposed to be peach.  Rather refreshing.

Cherry was…odd.  Super subtle.  The red apple and cherry aren’t very different shades, so I wasn’t sure which was which on first taste.  If someone said, ‘Here, taste this red apple.’ I’d have gone along with it.  But it was cherry.  Again, somewhat juicy tasting, but very lightly flavored, the least of the 5 flavors, actually.  Not medicinal at all, which was pleasant.  It was fine.

Red apple was fairly recognizable as red apple, which finally convinced me I had the colors/flavors correct.  This was nice.  Not so much a juicy flavor.  It actually had a stronger aftertaste of apple than while chewing.  After swallowing, it was like ‘that’s a nice apple flavor’.  It was a true RED apple to me, too.  Apple-y and not at all tart.  No ‘it says red apple but they mean green/sour apple’.  Pretty good.

Lastly was the lime.  Delicious lime.  I liked that this rounded out the 5 just as I wished when I saw the mix…not tart.  Juicy and lime-y flavored, little bite, just decent lime  flavor.  Very nice indeed. 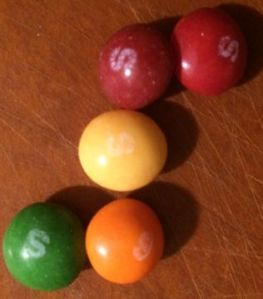 I really don’t eat many Skittles, occasionally just trying interesting combos.  These are good, though.  Nice to find some ‘grown up’ tasting fruit flavors that aren’t all soured up.

One thought on “Skittles Orchards are here”

Maybe find what you seek?

What are you looking for?